For the latest information about the City of PAE’s response to the COVID-19 situation please visit this page.

The City of Port Adelaide Enfield is committed to work with our community to provide a safe and efficient road network. Aligned with this, the Council has endorsed a program of Local Area Traffic Management (LATM) schemes across the Council area.

What is a Local Area Traffic Management scheme?

“LATM is concerned with the planning and management of the usage of road space within a local traffic area… it involves the use of physical devices, streetscaping treatments and other measures…to influence vehicle operation, in order to create safer and more pleasant streets in local areas.”
(Austroads Guide to Traffic Management, Part 8, Local Area Traffic Management, 2008 (page 4))

The City of Port Adelaide Enfield initially undertook LATM’s in Enfield, Alberton, Croydon Park and Birkenhead. Council was one of the first to implement this new form of traffic management and the Enfield area was used as part of development of guidelines and standards for traffic calming devices.

Why do a Local Area Traffic Management scheme?

There are a number of benefits but the key objective is to provide a holistic approach to overall traffic management in your local area rather than developing solutions on a ‘street by street’ basis.

The biggest benefit of a LATM is that community helps develop the scheme with experienced traffic engineering practitioners – thus the final scheme incorporates the community views to deliver the best possible outcome for the local community.

Council’s current plan of future LATM (subject to funding) is shown in the map below.

Enfield and Clearview (Central and North)

Initial feedback was sought from the community in March 2020 and a local area residents working group was formed to prepare a DRAFT Local Area Traffic Management Plan for further consultation with the local community.

The Torrens to Torrens (T2T) and Regency to Pym (R2P) sections of the North-South Corridor have resulted in significant changes to the operation of the local road network in the Devon Park, Dudley Park and Croydon Park areas. The partial severance of Pym Street (access will be restricted to left turn in and out) at South Road will result in traffic redistribution in the local area and changes to bus routes. DPTI recently funded a study to assess the anticipated likely impacts of their project on Council’s local road network. This study identified that some roads will experience a significant increase/decrease in traffic volume as a result of the project. Accordingly, Council has committed to developing a Draft Local Area Traffic Management Plan for the local area for further consultation with residents. A community meeting was held in November 2019 and subsequently a local area residents working group was called for and formed where a small group of local residents and businesses met over several months to deliberate and prepare a DRAFT Local Area Traffic Management Plan for further consultation with the local community.

The study area extends from Days Road to the Gawler Railway line to Torrens Road. Council is working with the City of Charles Sturt on this project as the southern part of this study area falls under their care and control.

The draft scheme has now been endorsed by the community and Council. Construction activities for the LATM Plan will begin in 2021 and continue through financial year 2021/22. Properties adjacent any recommendations will receive a 'notification of works' letter from the Construction team closer to the date of construction commencing.

The LATM Plan will be implemented in stages, with Stage 1 to be implemented in 2021 and Stage 2 treatments to be installed, subject to a review of traffic conditions following the completion of the Regency to Pym project in early 2022.

We will continue to monitor traffic safety in the local area before and after the implementation of the LATM Plan.

The LATM plan has been endorsed by the community and Council and can be viewed here.

We have completed the construction for 90% of the new Local Area Traffic Management Plan.

The plan is made up of 24 different projects, which were developed alongside a Resident Advisory Committee. This followed a rigorous technical analysis of traffic safety data and an involved community engagement process.

As the program of works is quite substantial for the Northfield LATM, the 24 projects have been prioritised into high, medium and low priority to ensure that the most required and beneficial treatments are installed first, where they are most needed and desired by the community.

There are 17 high-priority projects for the area which will greatly enhance traffic management and road safety. These high-priority recommendations are 90% completed. The road humps in Cox Terrace, improvements in Arthur Street, and other miscellaneous linemarking and parking control improvements will be installed in early 2021.

We will continue to monitor and compare traffic safety in Northfield before and after the implementation of the LATM Scheme.

The current program of LATM in Port Adelaide Enfield continued in 2013 with the Kilburn local area. Council undertook a LATM in response to the development of the Churchill Centre and associated changes to Churchill Road.

Council engaged the community and delivered improved amenity through traffic control devices with the work completed in 2017. In August 2018 Council undertook a review of the effectiveness which showed that devices were performing satisfactorily.

The final Kilburn LATM scheme is shown on the map below: The following photos show one of the devices installed as part of the Kilburn LATM; a Driveway Entry Treatment which reduces the road to one lane and requires drivers to slow or stop and take turns to pass through. The following stages shows the process on how we have undertaken LATM studies in our Council area.

The scheme is provided on the plan below: 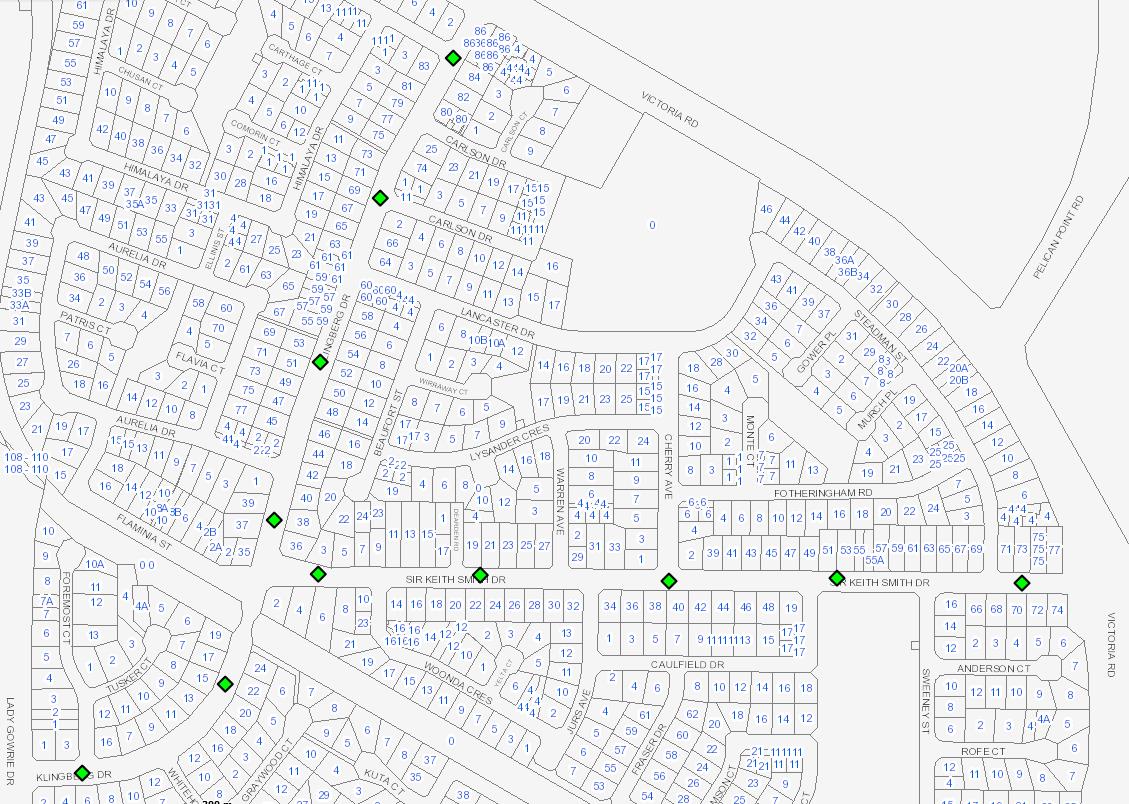 The map of the Enfield (South), Broadview and Clearview (South) LATM is shown below (the plan changed slightly as part of consultation to meet the needs of affected residents with removal of humps in Beaven Avenue and raised platforms in Markham Avenue (due to stormwater issues associated with their construction, similarly the eastern most humps in Collins Street and Corconda Street have been removed from the plan at this point of time due to similar concerns):

The Rosewater (north) LATM commenced in 2015/16 and encompasses the section of Rosewater north of Grand Junction Road. Completion of this LATM is anticipated in 2019/20. To date Council has reconstructed two existing roundabouts which were not constructed to current standards and undertaken detailed design and consultation for the remaining treatments which comprise of roundabouts, road humps, road narrowing and a pedestrian link across the closed railway line. ‘No Trucks’ signs have also been installed throughout the area to discourage non local trucks from cutting through the local road network. Parking controls originally proposed in the scheme have not been implemented due to objections from affected residents.

The traffic treatments along McNicol Terrace, McGregor Tce and Lee Terrace are being implemented. Works are anticipated to be completed in Rosewater at the end of the 2019/20 financial year.

The Greenacres LATM commenced in 2017/18 and was presented to the February 2019 Council meeting. The draft scheme has been endorsed by Council and is now in the detailed design stage.

The Greenacres LATM scheme currently under consideration by the community is shown below. Webchat techincal failure!
Sorry, chat is not available right now.
If you would like to get in touch with us, please email service@cityofpae.sa.gov.au or head over to our online services page.